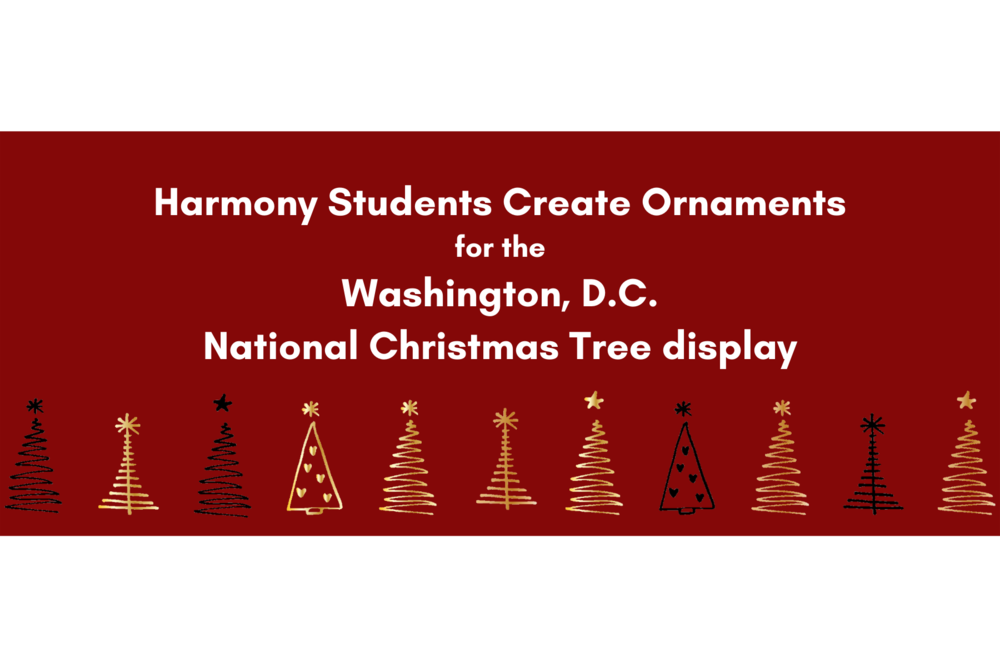 WASHINGTON – Students from 58 schools across the nation and abroad have designed one-of-a-kind ornaments for the 2021 National Christmas Tree display on the Ellipse in President’s Park. These unique ornaments will adorn 58 smaller trees surrounding the National Christmas Tree. The trees represent each U.S. state, territory and the District of Columbia as part of the America Celebrates ornament display. Schools managed by the Department of the Interior’s Bureau of Indian Education and the Department of Defense Education Activity will also participate in the display for the first time this year.

The America Celebrates ornament program is an annual collaboration of the National Park Service (NPS), the U.S. Department of Education and the National Park Foundation (NPF). The U.S. Department of Education worked with states and territories to identify elementary, middle and high schools to participate in the America Celebrates program. The project is funded by the NPF.

From state flowers to notable landmarks, students created ornaments that celebrate the places they call home. Check out the President’s Park Facebook page for more photos of ornaments.

The America Celebrates display is one of the highlights of the National Christmas Tree experience. In partnership with NPF, CBS will broadcast the 2021 ceremony on Sunday, Dec. 5 at 8:30-9:30 PM, ET/8-9 PM, PT on the CBS Television Network.

You’re invited to view the National Christmas Tree and the 58 state, district and territory trees and their ornaments up close daily from Dec. 4 through Jan. 1, 2022.

The National Christmas Tree Lighting has strong ties to education. In 1923, a letter arrived at the White House from the District of Columbia Public Schools proposing that a decorated Christmas tree be placed on the South Lawn of the White House. On Christmas Eve that year, President Calvin Coolidge walked from the Oval Office to the Ellipse and pushed a button that lit the first National Christmas Tree. It was a 48-foot balsam fir donated by Middlebury College in Vermont.

Stay tuned to learn more about this year’s event! For more event information and updates, please visit www.thenationaltree.org and follow President’s Park on Facebook or Twitter.

ABOUT THE NATIONAL PARK SERVICE

More than 20,000 National Park Service employees care for America’s 423 national parks and work with communities across the nation to help preserve local history and create close-to-home recreational opportunities. The National Park Service has cared for the White House and its grounds since 1933. President’s Park, which includes the Ellipse and Lafayette Park, was officially included in the national park system in 1961. Visit us at: www.nps.gov, on Facebook: www.facebook.com/nationalparkservice, Twitter: www.twitter.com/natlparkservice, and YouTube: www.youtube.com/nationalparkservice.

ABOUT THE U.S. DEPARTMENT OF EDUCATION

The original Department of Education was created in 1867 to collect information on schools and teaching that would help states establish effective school systems. In 1980, Congress established the U.S. Department of Education as a Cabinet-level agency. While the agency’s name and location within the Executive Branch have changed over the past 150 years, this early emphasis on getting information on what works in education to teachers and education policymakers continues to the present day. Today, the Department operates programs that touch on every area and level of education. Its elementary and secondary programs annually serve over 18,000 school districts and more than 55 million students attending nearly 100,000 public schools and approximately 35,000 private schools. Department programs also provide grant, loan, and work-study assistance to about 16 million postsecondary students.

ABOUT THE NATIONAL PARK FOUNDATION

The National Park Foundation works to protect wildlife and park lands, preserve history and culture, educate and engage youth, and connect people everywhere to the wonder of parks. We do it in collaboration with the National Park Service, the park partner community, and with the generous support of donors, without whom our work would not be possible. Learn more at nationalparks.org.